What You Can Expect When Detoxing From Drugs and Alcohol

Substance use is extremely common and, because of that, substance use problems are also common. When detoxing from drugs or alcohol, withdrawal is inevitable and, depending on the substance from which you're detoxing, the symptoms of withdrawal can range from mildly uncomfortable to dangerous.

Understanding how the substance in question affects the body — as well as its absence — is the first step to recovering from a substance use problem safely and successfully. Learning the extent of the danger involved in withdrawal allows you to prepare for any potential issues that may arise.

The body is adaptable, and with continued use of drugs or alcohol, your body will acclimate to the influence of these substances and learn to function with them. Drug or alcohol cessation requires the body to relearn how to function without regular doses of the substance. This adjustment period is called withdrawal, and it tends to be very uncomfortable for most people.

Withdrawal can be mild, involving little more than headaches or irritability, or it can be more severe, with symptoms including psychosis and hallucinations. Withdrawal symptoms are often more severe when a person suddenly stops using drugs or alcohol without weaning off of it. The sudden change from regularly getting the substance to receiving none at all can be an ineffective way to detox. The cravings often become too much to handle, and relapse becomes likely.

Even when a person slowly reduces how much alcohol or drugs they consume, withdrawal is still very likely as the body figures out how to function without the substance it relied on.

Continued use of any addictive substance leads to a reliance on it as the body and mind become convinced that they need the drug to function. Therefore, withdrawal isn't limited to physical symptoms. Psychological withdrawal is also possible, in which the mind is so convinced that the substance is a necessity that it needs to be retrained to realize substance use isn't mandatory. Drugs and alcohol heavily impact the brain's chemicals, and the side effects of detoxing from drugs or alcohol can result in more fluctuation.

During withdrawal, the body is also in the process of expelling the substance and learning to reach and get accustomed to a new state of normal. The absence of the substance can lead to direct physical symptoms. For example, heroin generally makes its user constipated, so when the body expels the drug, it starts returning to its pre-heroin state, making diarrhea a potential symptom of heroin withdrawal.

Whether physical or psychological, what to expect when detoxing depends heavily on the substance from which you're detoxing. Since different substances interact with our minds and bodies in different ways, the side effects of detoxing will inevitably vary. Some drugs require a shorter time to detox, while others call for professional assistance. The amount of time a person has been using the substance also matters, and the side effects of detoxification can become dangerous if left unmanaged.

Essentially, withdrawal is the body's way of recreating the effects of the drug it's no longer receiving, which is why a surge of adrenaline and cravings occur simultaneously. These symptoms can last anywhere from a few days to a few months and can be mild to severe, depending on the substance and the amount of time it was used.

Alcohol is one of the most common substances used, and it can become addictive quickly. Those who have experienced alcohol dependency for a long time are better off weaning themselves off the substance rather than quitting cold turkey. Seizures and other serious medical conditions are possible for people who have had an alcohol use problem for an extended length of time.

Though it's not possible to identify exactly how anyone will react to detoxification, it's safe to conclude that the amount of alcohol a person was consuming links to how severe their withdrawal symptoms will be.

Those who have previously experienced alcohol withdrawal or have certain preexisting medical conditions are also at a higher risk of experiencing severe detoxification.

Common side effects of detoxing from alcohol include:

Delirium tremens (DTs) is another potential impact of detoxing from alcohol. It is a severe form of alcohol withdrawal and can affect those who are in the process of alcohol cessation. While withdrawal itself is uncomfortable, DTs can be fatal. Some symptoms of DTs include:

DTs is considered a medical emergency, especially when seizures are involved — these are full-body convulsions that occur between 12 and 48 hours after the last drink. Those who have had an alcohol use problem for a long time and those who indulged in alcohol heavily are more at risk of developing DTs.

Marijuana is considered one of the most popular recreational drugs around. Marijuana withdrawal can arise during recovery from a marijuana use disorder, which occurs when the brain and body become used to receiving a consistent supply of delta-9-tetrahydrocannabinol (THC). As more research comes out, health care professionals are recognizing the high risk of relapse for those who stop smoking it.

Marijuana is not as addictive as harder substances like opioids or alcohol, and physical and psychological dependency are much milder for marijuana users. Nevertheless, it's easy to develop a marijuana dependency, and, like with alcohol, those who consume more of it for longer are at a higher risk of addiction.

Marijuana withdrawal symptoms start showing about a week after cessation and include:

Cocaine is very popular at social events like parties and is coveted for the feeling of euphoria it gives the user. This euphoria is actually a burst of dopamine that the drug triggers. Cocaine's sudden dopamine rush brings an increased risk of physical and psychological dependency, making it a difficult drug to quit. Once the burst of dopamine fades away, the body naturally begins to crave more cocaine to relive the euphoria.

Cocaine is one of the most addictive substances around, with 5% to 6% of people who use it regularly becoming addicted within a year.

The impact of detoxing from drugs like cocaine include withdrawal symptoms such as:

Another popular party drug, ecstasy is also coveted for its mood-boosting effects. It can manipulate the user's perception and distort their sense of time. Ecstasy stops the brain from receiving serotonin, which is best known as the chemical that promotes feelings of happiness. Overuse of ecstasy deprives the brain of the serotonin it needs, which can lead to serotonin syndrome, a potentially life-threatening disorder.

Continuous ecstasy use means the user may find it difficult to control their emotions or feel pleasure when sober. On top of that, some people react badly to the drug after taking it. In 2011 alone, almost a quarter-million people went to the emergency room because of a bad drug reaction.

When taken, ecstasy stays in your system for up to 72 hours. Withdrawal symptoms of this substance include:

Withdrawal symptoms for ecstasy tend to become less severe after about a week of sobriety and almost fully disappear after a month. 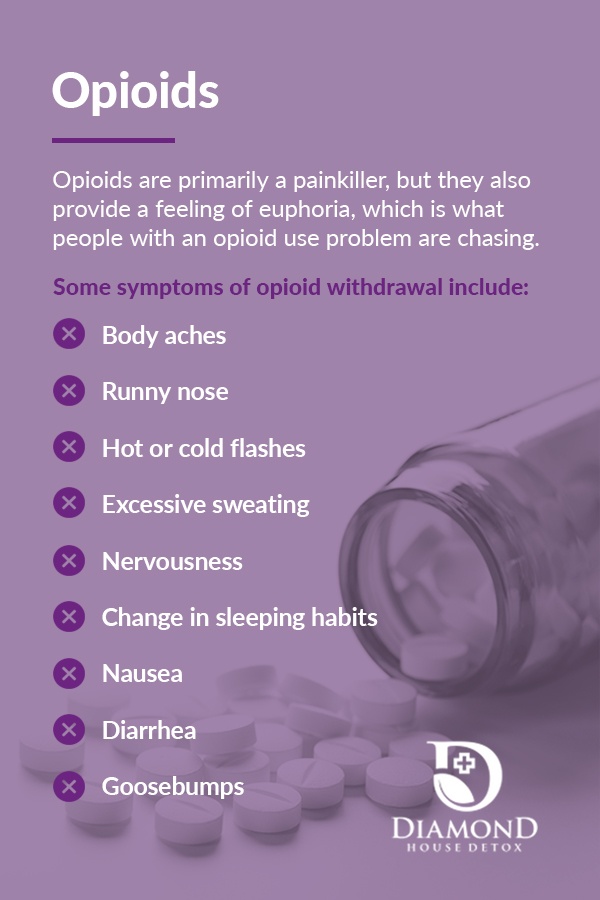 The prevalence of news stories about the opioid epidemic has brought more attention to this drug class, which is one of the most addictive and was once incredibly easy to access. Opioids initially started as painkillers, with certain types of opioids still used as such, like morphine. With advancements in technology, scientists created synthetic opioids, which became more and more popular.

Today, medical professionals continue to prescribe opioids for pain relief. However, many "street" versions of opioids exist, which often have other illicit substances added to them. Heroin is the most popular example of a street opioid, and it's sometimes made with cocaine, making it extra potent.

Opioids are primarily a painkiller, but they also provide a feeling of euphoria, which is what people with an opioid use problem are chasing. It's incredibly easy to become dependent on opioids, and even a legally prescribed opioid course will leave the user with mild withdrawal symptoms.

Commonly, opioid withdrawal is very similar to the feeling of suffering from the flu, with symptoms like body aches, runny nose, hot or cold flashes and excessive sweating. Other symptoms of withdrawal include:

While they may not sound too bad on paper, these symptoms can become unbearable and lead to relapse unless cessation is done properly.

How Long Do Withdrawal Symptoms Last?

Just like the withdrawal symptoms themselves, the length of time they affect the user varies from substance to substance — as well as from person to person. Factors such as how long a person was using a particular drug and how much they were consuming also impact the severity of the withdrawal symptoms and their duration. Here's a closer look at the timeline for each of the drugs we've gone over:

The possibility of relapsing is a major concern when detoxing from drugs or alcohol, which is why it's recommended to seek the assistance of a medical professional when you're ready to solve your substance use problem. Without trained help, it can be difficult to fight withdrawal symptoms, making it tempting to relapse.

In cases involving substances like opioids and alcohol, it can even be dangerous to quit cold turkey without professional help. Prolonged use requires proper weaning so your body doesn't receive a sudden shock, which can potentially make withdrawal symptoms worse.

Start on the Road to Recovery With Diamond House Detox

At Diamond House Detox, we aspire to help you achieve your goal of sobriety, and we do that by ensuring all clients receive the highest quality of care in a safe, comfortable and accepting environment. We offer a range of detoxification treatments, and we also specialize in treating co-occurring disorders. Our goal is to help you on your road to recovery using evidence-based treatments.

Our residences feature private rooms and on-site support meetings, and we also offer a personal chef for your dietary needs. We're also proud to offer Incidental Medical Services, which allow us to provide clients with medically assisted detoxification (MAD). Regardless of the type of treatment you receive, you can rest assured that we'll curate it to your specifications, so you can be sure you're truly getting the help you seek.

We offer 24-hour in-patient admission, and there is always staff on duty, so you can seek assistance at any time of the day or night. Feel free to browse our detoxification programs or get in touch at any time by giving us a call.