Fentanyl and Alcohol: How Do They Interact?

However, alcohol use can turn into misuse — and more than 14 million people in the U.S. have alcohol use disorder. That's a concern on its own. But what happens when an illicit substance like fentanyl comes into the mix?

Here's a look at how and why alcohol and fentanyl are a dangerous pair.

Fentanyl is a synthetic opioid, meaning it's an artificial drug. For comparison, similar drugs like opium and heroin are natural opioids. These drugs have related effects, but fentanyl is known to be much more powerful, as it's 80 to 100 times stronger than morphine.

This drug was originally developed as a legal anesthetic. Since its initial use in the 1960s, people have illicitly produced fentanyl for illegal recreational purposes. Doctors can either administer it intravenously or via a pain patch. Those who use fentanyl illicitly either snort it, smoke it, ingest it in pill form or take it on blotter paper. It's possible to obtain legal doses to use illicitly through injection or a pain patch.

Why do people misuse fentanyl? It comes with strong, addicting side effects. The drug makes users experience feelings like relaxation, euphoria and pain relief. However, fentanyl can also cause dizziness, nausea and vomiting — but users like the good effects so much that they don't mind the downsides. Fentanyl can sometimes go by street names, which include "Apache," "China Girl" and others.

While some users may explicitly seek out fentanyl, users may come across fentanyl accidentally when they take other drugs. For example, cocaine and heroin may include fentanyl to increase the drug's effects. This combination can increase the user's risk of overdose and death.

The Risks of Fentanyl Misuse

Fentanyl is a controlled substance, which means only physicians can legally prescribe the drug under explicit instructions and guidelines. These regulations control the dosage amounts to ensure a healthy recovery without addiction risk. That said, any potentially addictive, lethal substance carries risks.

For fentanyl, users may experience the following risks:

Alcohol's Effects as a Depressant

Alcohol can lift your spirits and boosts your energy, so it has some stimulant-like effects. It can increase your heart rate and affect your inhibitions, making it easier to chat and relax. That said, alcohol is primarily a depressant. It influences the chemicals in your brain, effectively slowing down the nervous system.

The Risks of Alcohol Misuse

Misusing alcohol can have a serious impact on your health in the short and long term. The risks of alcohol misuse include: 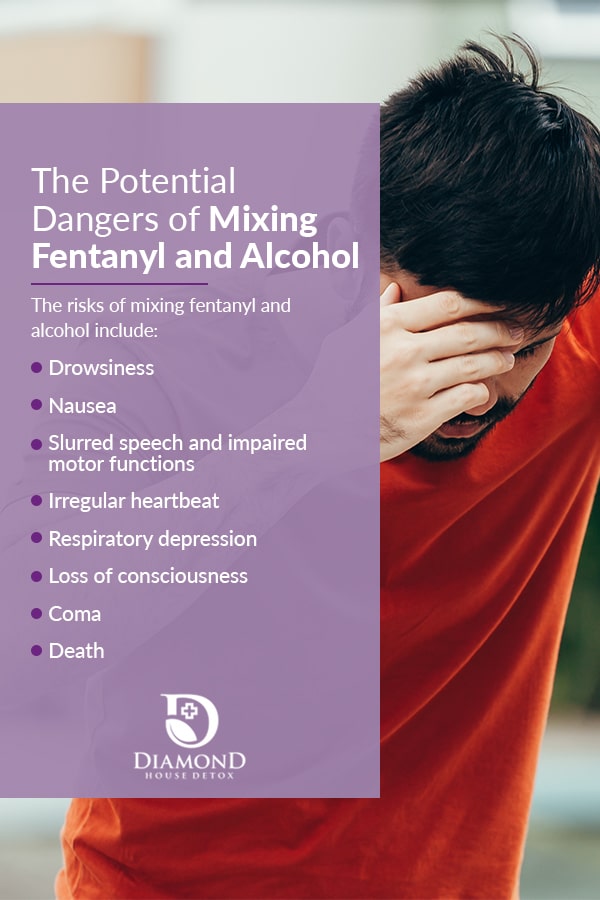 The Potential Dangers of Mixing Fentanyl and Alcohol

The risks of mixing fentanyl and alcohol include:

Mixing a fentanyl patch with alcohol is just as risky as combining any other form of fentanyl with drinking. Physicians can prescribe fentanyl as a transdermal patch to help manage severe pain. The patches are designed to stick on the skin, much like a nicotine patch. It's simply a different way to administer the drug, rather than ingesting or injecting it through another form.

Contact your doctor as soon as possible if you notice any harmful side effects while wearing a fentanyl patch.

What Can Happen When Mixing Fentanyl and Other Drugs

Fentanyl and alcohol interact, but that's not the only risky combination. Mixing fentanyl and other drugs can be just as dangerous.

When making cocaine or heroin, manufacturers may add fentanyl to the mix to help amplify and prolong the effects of the drug. Often, users are not informed that the substance they're using contains fentanyl. This addition can significantly increase the risk of overdose. Mixing any other opioid, such as heroin or oxycodone, with fentanyl will increase the effects of the drugs in your system and lead to a potentially dangerous outcome.

It can also be risky to mix fentanyl with other drugs, whether obtained for recreational use or legally prescribed. For example, mixing certain anti-depressants with fentanyl can cause an adverse drug reaction known as serotonin syndrome. While this reaction is rare, it's potentially fatal, so it's best to avoid combining fentanyl with other drugs even when you're taking it legally.

Options for Fentanyl and Alcohol Treatment

When you're ready to ask for help, fentanyl and alcohol addiction treatment programs are available. Recognizing you need assistance is a critical first step to help you on your journey toward recovery. Whether you're using fentanyl legally or illicitly, you shouldn't hesitate to reach out when you notice certain habits forming, like combining your use with drinking alcohol.

Once you enter treatment, you can expect:

Fentanyl addiction or alcohol addiction alone is tough to manage, but beating a reliance on both substances can be even harder. Fighting addiction is difficult, and withdrawal from fentanyl and alcohol is scary, painful and potentially dangerous. Thankfully, you don't have to face this fight alone.

Diamond House Detox offers support specifically for fentanyl addiction and alcohol addiction. We understand that everyone's journey to recovery will be different, and we treat each person as an individual who needs a customized treatment plan. Contact us to take the first step toward releasing the grip alcohol and fentanyl have on your life.